Madagascar Bourbon Pure Vanilla Bean Paste is crafted using only the best vanilla from the island of Madagascar. Long the choice of bakers and ice-cream makers, this paste adds depth and flavor no other vanilla can match. Vanilla Paste is convenient to use and infuses baked goods and ice cream ...

Madagascar Bourbon Pure Vanilla Bean Paste is crafted using only the best vanilla from the island of Madagascar. Long the choice of bakers and ice-cream makers, this paste adds depth and flavor no other vanilla can match. Vanilla Paste is convenient to use and infuses baked goods and ice cream with flavorful flecks of vanilla bean seeds. It's especially ideal for crème brûlée and ice cream recipes, as it adds the enticing visual flair of vanilla seeds. Due to its consistency, similar in thickness to molasses, Madagascar Bourbon Vanilla Bean Paste allows you to add vanilla without thinning out batters or sauces.

To replace vanilla extract in a recipe, simply measure the same amount of Madagascar Bourbon Pure Vanilla Bean Paste and add, or, replace one tablespoon of paste for every one whole vanilla bean. 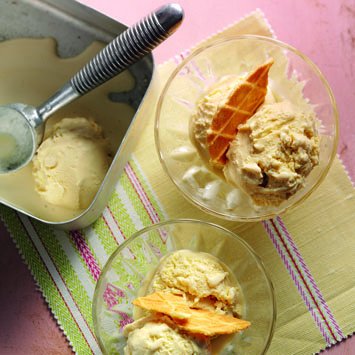 Heat the cream and milk over a low heat, stirring occasionally, until it almost boils – you’ll see a few bubbles at the edge. Take off the heat, fold in the Nielsen-Massey Vanilla Bean Paste or Vanilla Extract and set aside for 30 minutes so the vanilla can infuse.

Put the egg yolks and superfine sugar into a bowl and beat with an electric hand mixer for around 2 minutes until the mixture has thickened, is paler in color and falls in thick ribbons when you lift the beaters. Using a measuring jug, scoop out around 1/2 cup of the cream mixture and beat into the egg yolks to slacken them. Reheat the remaining cream until it just comes to a boil. Take off the heat and stir in the egg yolk mixture.

Return the pan to a low heat and cook, stirring all the time with a wooden spoon, for 8-10 minutes, until it reaches a custard mixture and is thick enough to coat the back of the spoon. Watch that it doesn’t boil – as soon as you see any bubbles about to burst to the surface, it should be thick enough, so take the pan off the heat so the mixture doesn’t curdle.

Get the ice cream machine running, then slowly pour in the cold custard. Leave it to churn for 10-30 minutes (depending on your machine). When it stops, it will probably be too soft to eat, so spoon into a plastic container and freeze.

Combine whipping cream, 3 tablespoons granulated sugar and vanilla bean paste in a medium saucepan over low heat. Stirring constantly, cook until simmering and steam is rising, then remove from heat,

Place the ramekins in a 9x13-inch pan that has a depth of at least 2 inches. Fill the pan with enough hot water to reach one-third of the way up the side of the ramekins. Bake for 40-45 minutes or until set. Let stand until cool. Chill, covered, until ready to serve.